I don't often make cakes and biscuits for eating at home - there's only two of us, and a whole cake is a bit greedy by anybody's standards - but a big walk along the river was a good excuse. Initially the biggest selling point for this recipe was that I already had all of the ingredients, but the biscuits were so delicious I've made them again since, and they are now firmly on The List.

They're crunch, spicy biscuits, which will keep well in a tin for up to a week. 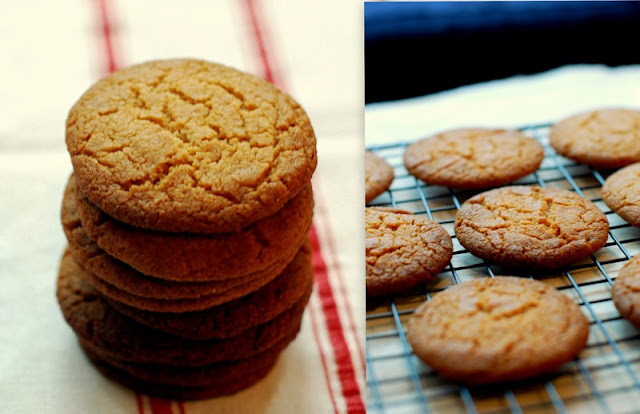 Heat the oven to 200C and line two baking sheets with parchment.

Melt the butter, sugar and golden syrup over a low heat until. Remove from the heat and mix in the sifted flour, the ginger, mixed spice, cinnamon, bicarbonate of soda and salt to form a soft dough. Roll the dough into 18 walnut-sized balls and place 2cm apart on the prepared trays.

Bake for 15 minutes until golden brown. Cool on a wire rack.
Posted by The Pantry and Parlour at 09:57