A recent trip to visit granny resulted in a bag-full of damsons. Crumble would normally be the first go-to in a situation like this, but it seems a bit too early in the year for such a stick-to-your-ribs pud. So instead, I thought I'd make some damson jam. 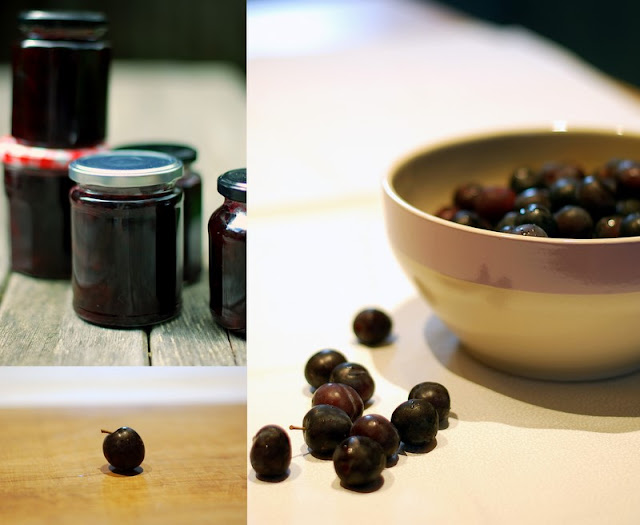 Jam is super easy to make, and the only thing that slows this one down is the stones. There are different ways of dealing with them: I settled down with a bowl and a knife and stoned the fruit over an episode of Sherlock Holmes; you can wait until your jam has cooked, then the stones should float to the top and you can just skim them off; or you can just live and let live, and let your fillings take their chances with the final product. It's up to you.

One last thing is that damsons have quite a low pectin level. As pectin is what makes the jam set, it's a good idea to use preserving/jam sugar instead of normal granulated sugar if you can. If not, don't worry, you'll still get jam, but it might be a bit runnier. 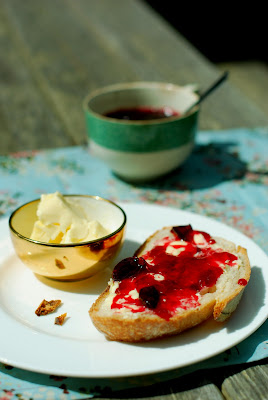 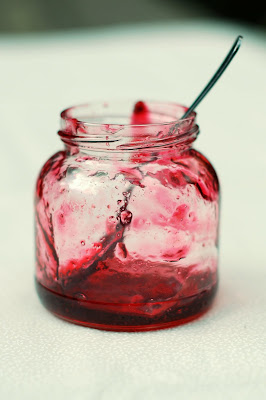 Put the fruit and the water into a big pan (you want one that's plenty big enough, and with high sides, so the jam doesn't boil over and make a hot, sticky mess) and simmer until the skins are soft and the liquid has reduced by a third.

Take the pan off the heat and add the sugar, stirring gently until it's all dissolved. It can help if you warm the sugar first, by putting it in the oven for 10 minutes, or a quick run through the microwave.

When the sugar has dissolved, return the pan to the heat and boil it rapidly until the setting point is reached. Take the pan off the heat and let it sit for 15 minutes. Skim off any scum that has formed, then pot up into sterilised jars.
Posted by The Pantry and Parlour at 12:14